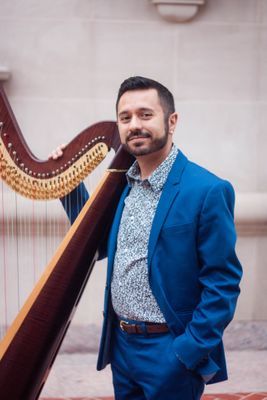 Vincent Pierce is principal harpist of the West Texas Symphony. He is the former director of the harp program for Ector County ISD, where he taught at Odessa High School, Ector Middle School and Milam Elementary from 2014-2019. He has also served as adjunct instructor of harp at the UT Permian Basin and at Odessa College. In fall of 2021 he began working as harp facilitator for Round Rock ISD, where he teaches at Round Rock HS and Cedar Valley, Chisholm Trail, and Walsh middle schools.

Vincent has performed in several countries – first in China in 2012 as a member of the Austin based band The Noise Revival Orchestra, and in 2014 throughout Asia and and Europe as a member of the University of Texas Wind Ensemble on their world tour, under the direction of Jerry Junkin. He recorded John Mackey’s “Wine-Dark Sea” with the UT Wind Ensemble in 2014 with Reference Recordings. He has also been an official South by Southwest artist and marched in the 2013 Presidential Inaugural Parade.

A native of El Paso, Texas, Vincent holds a degree in music education and clarinet from Baylor University. He began harp studies as a sophomore at Baylor, and continued at UT Austin, where he received a Master of Music degree in harp performance. Vincent also holds a Cambridge Certificate of English Language Teaching for Adults through the UT CELTA program.

He is past-president and a founding member of the West Texas Harp Society, a chapter of the American Harp Society, Inc. While serving as president of the WTHS he brought several guest artists to Odessa, including Russian harpist Sasha Boldachev and past AHS Concert Artist Abigail Kent, through grants from Odessa Arts and the AHS. Vincent collaborated with Odessa Arts on several projects, including the Second Tuesday Salon concert series and an NEA Big Read project, ‘Artpocalypse’. He has served as a Texas Music Educator’s Association All-State harp judge and sectional coach, and has been a clinician at the TMEA convention and the American Harp Society conference in Redlands, California. He currently serves as the South Central Regional Director and board member for the American Harp Society. Vincent is also a registered Suzuki harp teacher and a member of the Suzuki Association of the Americas. He has also served on the WTS Orchestra Committee as local representative, commuter representative, and committee chairman and board representative.

Vincent is currently completing a Doctor of Musical Arts degree at UT Austin, where his research focuses on the electro-acoustic harp. He also enjoys learning languages, particularly French and Mandarin, and is a proud cat dad to Frederic Toulouse and George Berlioz.