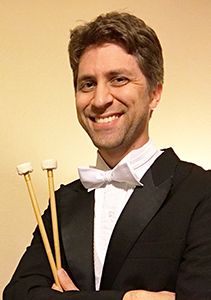 Tim Mabrey first joined the West Texas Symphony as a member of the percussion section in 2008, and after several seasons with the orchestra was named Principal Timpani in 2014. In addition to his position with WTS, Tim is also Principal Percussion with the Round Rock Symphony. Tim has performed with various other groups including the San Antonio Symphony and the Arkansas Symphony, and during summers with the Aspen Music Festival, Opera in the Ozarks, National Music Festival and Hot Springs Music Festival.

Tim’s major teachers include Matthew Strauss of the Houston Symphony, Alan Abel of the Philadelphia Orchestra, Joseph Tompkins of Rutgers University, and Christopher Deane of the University of North Texas.

Originally from Grapevine, Texas, Tim currently lives in Austin where he teaches middle and high school students and maintains an active freelancing career.