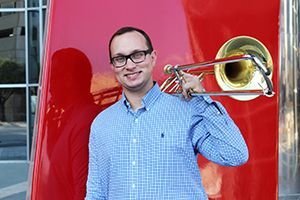 Mr. Rhodes moved to Midland, TX in July 2022 to begin his new role as Principal Trombone with the West Texas Symphony and trombonist with the acclaimed Lone Star Brass Quintet. Mr. Rhodes has had the privilege of performing with the Carmel Symphony, the McKinney Philharmonic, the Allen Philharmonic, the Terre Haute Symphony, the Miami Classical Music Festival Orchestra, and the Dallas Winds. He has performed at Jazz at Lincoln Center, TMEA, Normandy (France), London (England), the Meyerson (Dallas, TX), and several other venues around the United States.

Aside from performing, Mr. Rhodes is very active with the educational aspect of music. During his doctoral studies at UNT, he taught several private lesson students from Lewisville ISD, McKinney ISD, Birdville ISD, Cleburne ISD, and Grapevine-Colleyville ISD. His students have gone on to win spots in the TMEA All-Region, All-Area, and All-State Bands. Mr. Rhodes is also a strong proponent for the marching arts and regularly helps out with the marching bands at Birdville High School, Grapevine High School, Colleyville Heritage High School, and Odessa High School. Mr. Rhodes currently serves as the Director of Bands at Crockett Middle School in Odessa, TX and oversees a thriving program of more than 200 middle school band students. Mr. Rhodes hopes to inspire all of his students to be not only great musicians, but well-rounded individuals first and foremost.