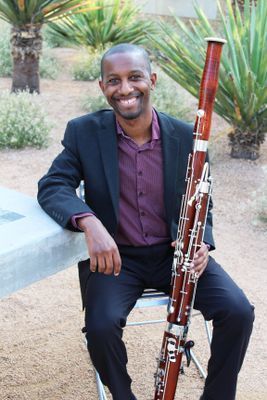 Philip Hill is Principal Bassoon of the West Texas Symphony and Bassoonist of West Texas Winds. He earned his Master’s degree in Music Performance at the University of Arizona. During his time at UArizona, he studied with William Dietz, was Principal Bassoon of the Arizona Symphony Orchestra, and was bassoonist in the Fred Fox Graduate Wind Quintet and the Saguaro Bassoon Ensembles. He earned his Bachelor’s degree in Music Education at East Carolina University, where he studied the bassoon under Christopher Ulffers and was Principal Bassoon of the ECU Symphony Orchestra. He also performed at times with the ECU Opera, which is known for performing a wide variety of works from the standards of Mozart to world premieres. As part of the North Carolina New Music Initiative, Philip participated in many premieres, recordings, and new music projects. Most notable is his performance in the world premiere and recording of Travis Alford’s Loose Strands for chamber wind ensemble. He also made an appearance with the North Carolina Symphony during his time in the Southeast. Philip toured Europe at age 17 as part of the Virginia Ambassadors of Music, then returned to Europe in 2017 as a member of the Prague Summer Nights Festival Orchestra, which performed in Prague in the famous Estates Theatre and the Rudolfinum, and the Mozarteum in Salzburg. Philip has also performed with the Bay View Chamber Music Festival and Opera in The Ozarks Orchestra.

Despite his heavy performance regimen, Philip is active as an educator, holding a private teaching studio in the Permian Basin. He is an adjunct faculty member of the University of Texas Permian Basin, and has been a resident artist at the University of Idaho, Youth Orchestras of Lubbock, and Midland Montessori School. His Instagram and YouTube pages, @Bassoonatlarge, include tutorials on reed making as well as music for TMEA auditions. He is a frequent clinician throughout his various roles, and hosts masterclasses for TMEA audition preparation with the help of his great colleagues in the West Texas Symphony and Cassatt in the Basin.