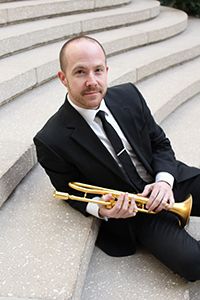 Eric Baker grew up in Ft. Worth, TX, and began playing the trumpet at age 11. He received his B.M. in Music Education from the University of Texas at Arlington, and earned his Master’s Degree in Trumpet Performance from Arizona State University where he studied with internationally renowned trumpet soloist, David Hickman. Mr. Baker was a member of The Cavaliers Drum and Bugle Corps for three years (2000, 2002, 2003).

Mr. Baker moved to Odessa, TX in July 2006 to begin his tenure as Co-Principal trumpet with the West Texas Symphony. He has also performed with the Big Spring Symphony, and the San Angelo Symphony, the Legend Brass Quintet, the West Texas Trumpet Workshop, and the Salt River Brass Band. He also performs regularly with the Lone Star Brass Quintet, Current Nine, The Pinstripes Jazz Quartet, and Emily & the Rhumba Kings. He performed with the touring production of the hit Broadway musical Chicago, and has performed on stage with The Temptations and The Four Tops. He free-lances all over West Texas, and is a highly sought-after marching band clinician and private teacher.

In 2007 Mr. Baker was invited to be a featured soloist at the Western International Band Clinic in Seattle, WA, and in 2010, he was a semi-finalist for the National Young Artists Competition. In 2011 he performed as a trumpet soloist with the West Texas Symphony, and in 2016 he was invited back to perform with the WTS as a vocal soloist. Mr. Baker appears as a trumpet artist on the albums "What Sweeter Music" and "Rocket Science," and appears on the album "Caleb Young" as a vocalist.

He was appointed to the position of Director of Bands at Odessa College in 2009 where he conducts the Concert, Jazz, and Athletic bands, teaches the trumpet studio, conducts the opera productions, and serves as Chair of Visual and Performing Arts Department. He also serves on the board of directors for Odessa Arts, and the West Texas Jazz Society. His wife, Emily is the director of the WTS Voices of the Permian Basin. They have three daughters, Piper, Keller, and Harper. Mr. Baker is a Conn-Selmer Endorsing Artist.