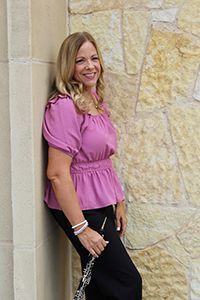 Caryn Crutchfield, oboe, is beginning her twenty-fifth season with the West Texas Symphony. She holds a Bachelor of Music degree and a Master of Music degree in Oboe Performance from West Texas A&M University in Canyon, TX where she studied with Robert Krause. Caryn was privileged to be the guest soloist with the MOSC in 2012. She has performed at the Texas Music Educators’ Association Convention on three occasions and with the WTAMU Director’s Band at the Texas Bandmasters’ Association Convention twice. She performs regularly as a member of the West Texas Winds woodwind quintet and teaches at Bowie Fine Arts Elementary School, The University of Texas, Permian Basin, and the West Texas A&M Band Camp. Caryn currently teaches private lessons to students throughout  the Permian Basin and has a thriving reed making business. She is married to Kevin, a violinist in the West Texas Symphony, and has three children.