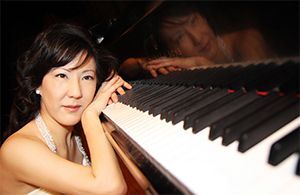 Hailed for her “expressive and powerful playing” formidable technique, as well as a “keen sense of lyricism and the classical style”, Korean-American pianist Caroline Hong continues to flourish in her career as an internationally active performer, masterclass teacher, and jury member of piano competitions. To that end, this season takes her to Boston University, Manhattan School of Music, UCLA, and numerous other organizations and institutions of higher learning as an Artist-Teacher and adjudicator. She has served as jury member for the Bartok-Kabalevsky International Piano Competition and Aarhus International Piano Competition among others, and as a faculty for the Amalfi Coast Music Festival, Vianden International Festival and School (Luxembourg), Indiana University Jacobs School of Music Piano Academy 2021, Cincinnati College-Conservatory of Music, and Longwood University. Currently, she is Professor and Area Head for the Piano Area at The Ohio State University School of Music.

Her training is from the Peabody Institute of the Johns Hopkins University (BM) where she was a scholarship student and graduated with performance honors and an accelerated degree, the Juilliard School (MM) where she also graduated with an accelerated degree, and Indiana University (DM) where she served as an Associate Instructor in both Theory and Secondary Piano. She attended the Music Academy of the West (Santa Barbara) as a student of Jerome Lowenthal, where she won the concerto competition, and the Sergei Babayan International Piano Academy where her work was broadcast live. During the pandemic, Columbus Symphony Orchestra produced of several live broadcasts, two of her work; one with the Concertmaster in a duo program of Gershwin and Ravel, and another as the soloist in Prokofiev’s Third Piano Concerto under the baton of Maestro Rossen Milanov.

Caroline Hong serves the American Liszt Society on the Board of Directors, as the President and Co-Founder of the Ohio Chapter, and as the Executive Director of the Franz Liszt International Piano Festival and Competition.

Her recordings of contemporary piano music have been reviewed favorably by American Record Guide. Pulitzer Prize and Academy award-winning composer John Corigliano referred to her as “one of the greatest pianists I have ever heard” after a performance of his Etude Fantasy (composed in 1976). She can be heard on Fleur de Son records in all three piano sonatas of Carl Vine.